We have had some cancellations, but have plenty of great food coming.  If you did not RSVP it will not be a problem so please come and join us.  New members and friends are welcome!!

The party location is the Historic Pierce St. Mansion at 2901 Jackson Street (two blocks east of Pierce St.) in Sioux City.  The Big Sioux Rider’s Christmas dinner is free to paid members - $15/person for others.  Annual membership is $20 for individual, or $25 for a family.  Family members may bring an additional guest (paid).  Steve Martin will be collecting member dues for 2014 at the party when you arrive.

This year the entrees will be prepared by Trattoria Fresco (www.trattoriafresco.biz), a local Italian restaurant in Sioux City.  The entree dishes are Lasagna, Fettuccine Alfredo, and Pollo Vesuvio (chicken).  You don’t need to specify which dish when your RSVP, you can try them all.  We are requesting everyone to bring a snack food, desert or a side dish.  You will also need to bring your own beverage(s).  We will have plates, flatware, cups and coffee available.

We will have the traditional Big Sioux Riders gift exchange so bring a gift costing between $10 and $20.  The gifts do not have to be motorcycle related.  Bring something fun, useful, or re-gift a stinker.

After dinner the club will vote on the Big Johnson Award and elect 2014 officers.  Nominations for officers are currently: Terry Hughes for President and Steve Martin for Treasurer, all other positions are open.  If you want to run for office or submit someone, please drop me an email.  Nominees have to be living persons and willing to join the club  The group is pretty willing to support you if you want to run for a club position for a year.

We are also looking for 2013 Big Johnson Award nominations still.  We don’t have any current favorites (besides Terry Hughes), so there is still time to get your nomination in.  Nominate for your favorite rider or spouse by sending your nominations to Jim Johnson (jimj@urban-inc.net) and last year's winner Dan Watson (skippy.223@hotmail.com).  Please include a short or long explanation about why you think your nominee should win.  Non-members from the local/regional motorcycle community can also be nominated.

Last night, Sept 25th, was the 4th Wednesday of the month.  We had 5 riders show up for the bi-weekly ride.  Jim was the last to arrive so he got to lead the ride east and south of Sioux City.  Photo from left to right Don, Cam, Dave and Jim.  Passed the hat afterwards and Dave cooked up some great hamburgers, Thanks Dave. 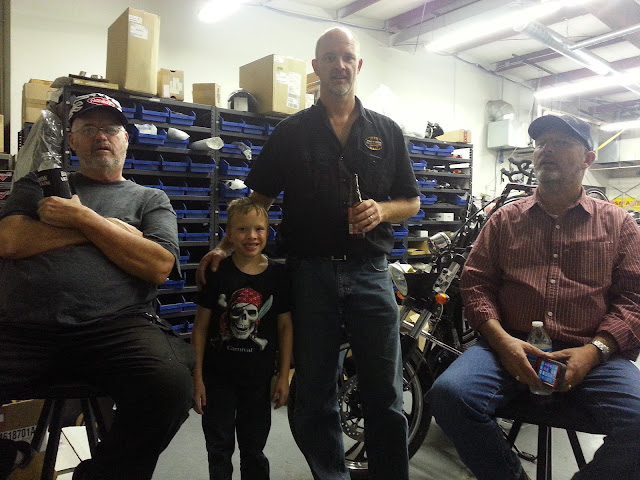 The Big Sioux Riders are going to try meeting for a regular ride on the 2nd and 4th Wednesday of every month starting this Wednesday.  The destination will be determined by everyone who shows up to ride, expect about a 1 hour ride.  We will meet and end at Dave Bak's BMW shop at 6 PM.  We will grill out at the shop after the ride and pass a hat to pay for the food.  The idea is to get the club members out riding more frequently together and maybe bring in some new members.  Please feel free to bring someone with you.

Posted by Brion Hase at 9:57 AM No comments:

Jim Hawthorne, a Big Sioux Rider and CMA member from Sioux City welcomed the Big Sioux Riders to their 4th Annual Pancake Breakfast and Ride this Saturday, May 4th at Rooster's Harley-Davidson in Sioux City.  The breakfast starts at 8:30 AM Saturday.  They are asking for a $5 donation for adults and $3 for children.

If it only stops snowing... wait... even if it does keep snowing the 10th Annual Big Sioux Riders (Sioux City, IA) and Autobahn (Sioux Falls, SD) Spring Campout... at the Dam ... on Mother's Day weekend is on. The old event name was changed after we got a few complaints about the order of words in the event name, but it's still the same low-key, friendly event. Mark May 11-12 (Sat-Sun) down as the dates and meet us there. We camp at the Fort Randall Recreation Area below the Pickstown Dam because the weather is nicer down there. The hot showers and running water bath rooms will turned on by then and we will have warm coffee brewing all night long. Come site around the campfire, kick some lies and tell us about your tires. See you there.Details Here:http://www.bigsiouxriders.org/10th_Annual_Campout.pdf
Posted by Brion Hase at 2:13 PM No comments:

Monthly Meetings
The Big Sioux Riders meet monthly on the third Tuesday of each month at 6 PM. New members are always welcome. Drop by and introduce yourself. Regular meeting are held September through May. Other meetings with rides are arranged during the summer months. Check schedule below for locations and dates.

Dues
Our annual dues are $20 member or $25 for a family. Most of the dues go to help pay for dinner at the Christmas party and other miscellaneous costs and expenses. You can pay your dues and complete a membership form at Bak BMW Victory in Sioux City. Dave is currently our club treasurer. The 2012 Club President is Jim Johnson, Dan Watson is Vice-President, Brion Hase is the Secretary, and Jo Martin is our Sunshine Lady. You may also pay your dues online using the PayPal link on the left.

Posted by Brion Hase at 6:00 AM No comments:

The follow is a compilation list of the Youtube videos which we watched at the Joses'n Party Saturday evening.  This year's party was a great success, thanks Steve and Jo!

RMAR 2012 ride -- 1000 miles through God's country (We need Ladue to comment on if this is what he has been doing in Colorado the past two summers):
http://advrider.com/forums/showthread.php?t=820185

Erzbergrodeo 2012 - Red Bull Hare Scramble (* Not sure we watched this one, but should have)
http://www.youtube.com/watch?v=Nso2xdojiPE