I received the following note from Jim Gaston of BMW Motorcycles of Omaha. The BMW Performance Center in Spartensburg, NC is hosting an The Great Smokey Mountain Enduro Tour on June 12th and 13th, 2010.

Doug Shonley picked up the following flyer and asked me to forward it to the group. It's the May newsletter from Gina's BMW in Iowa City. It contains information about a lot of events, including:
PDF Flyer (Click Here)

Jim Johnson forwarded this message on to his friend Gerry Schulte and got the following reply:

I haven’t talked to him since last summer, but they told us at Morton’s Open House that the factory gave Nate an S1000RR to ride this year. In April, he ran seven races in Savannah, and won all seven. As you heard, he loves that bike.

Posted by Brion Hase at 8:33 AM No comments:

I got a note this morning from Randy R's wife Karen this morning that Randy had emergency surgery last night at 2 AM for compartmental syndrome on his left calf. Karen says it is touch an go right now as they wait to see if the nerves and tissue damage will recover. He is in room 309 at St. Lukes in Sioux City.

I also recieved a note from Terry H. saying that he had been spending a lot of time with his father lately because his mother had recently passed last week and her funeral was yesterday. Terry is hoping to make it to Stan's last ride as a free man.

One last note. Dan W. made it back to Sioux City last week and is at home now. He is still in a lot of pain but he continues to get better.
Posted by Brion Hase at 8:49 AM No comments:

Stan Stille sent the following announcement and asked it to be forwarded to all BSR club members:

Stan Stille and Mari Mathieson invite you to join us in the joyous celebration of our marriage.

Love is patient, love is kind. It does not envy, it does not boast, it is not proud. It is not rude, it is not self-seeking, it is not easily angered, it keeps no record of wrongs. Love does not delight in evil but rejoices with the truth. It always protects, always trusts, always hopes, always perseveres. I Corinthians 13: 4-7 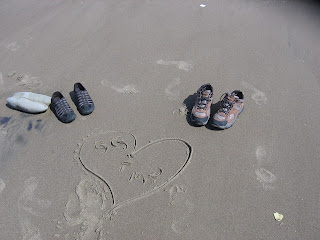 Posted by Brion Hase at 8:52 AM No comments:

Marc LaDue is looking for anyone interested in riding the Trans American Tran with him next summer. If your interested give him a call and see what can be cooked up.
Posted by Brion Hase at 8:32 AM No comments: 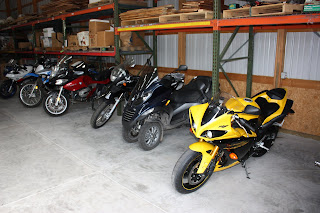 Campout/Ride at the Shonley's in the Black Hills July 9th - July 11. The location is exactly 5.1 miles West of Sturgis, SD exit 30. We are planning on you arriving late on Friday evening. We have good lights so you won't be completely in the dark when you setup your tent. You will be able to park your bike inside if you want to. We also have an indoor area for eating and conversation in case of in-climate weather. Plan now is to have breakfast at the Chat & Chew at 7am and start the rides at 8am. Meet back at the house around 5pm. We will have an evening meal and conversation into the night. Sunday mornings we go to Church. You are welcome to go with us. Make sure your bike is in good running order with fresh tires. The roads are very good, well marked, and usually very clean. This will probably encourage you to use more of the edges of your tires, so you want good ones. If people are interested I can setup an adventure run or two. For those with GSs we can do some gravel etc. Just let me know what you want to see. We would like to know if you are coming by June 1st so we can do some planning (Let Brion know and he can tell us). See you on the road.
Douglas Shonley (605)347-5006
Posted by Douglas at 7:51 PM No comments:

I picked this message up from the Bahnsturmer's mail list. It was posted on April 24th as a note from Engel Motors in KC - bjh
----
Here is information regarding the upcoming TRACK DAY with NATE KERN on Sunday, August 22, 2010 at:

RIGHT NOW IS THE TIME to SIGN UP for TRACK DAY - We need EVERYONE WHO IS PLANNING ON ATTENDING to SIGN UP and PAY THE $150.00. COMMITMENT IS VERY IMPORTANT TO SECURE THE TRACK FOR AUGUST 22.

Here is information regarding the upcoming TRACK DAY with NATE KERN on Sunday, August 22, 2010 at:

This is an opportunity to ride with Nate. Nate really knows how to make a BMW go around at speed. Come spend time with us at Mid American Motor Plex and explore what you and your machine can do within the safety of a closed course.

Everybody goes the same way.

No trees, signs, poles or dogs.

Strict rules tailored to your group level for your safety.

Instruction from the man. Nobody knows how to put it together on a BMW like Nate - nobody.

BMW Novice (passing only on straights)

BMW Intermediate/Advanced (passing on the outside of corners)

The 6 foot Rule applies to all groups.

CAMPING: Is available for any event. Weekend Rates are $25 per campsite. We offer on-site security, clean, private shower rooms; large, modern restrooms. We currently have 16 electrical hook-ups on the road course and more to be added in the future.

LODGING: Special Rates for MAM customers are available from the following places:

PLAN TO ARRIVE SATURDAY AFTERNOON or EARLY EVENING for a walk around the track with Nate and friends. Great opportunity to learn the basic way around and discuss the track before Sunday!

(You will be REQUIRED to sign a Waiver before entry on MAM property or Track.)

Cindy Otten, a BMW Rider, from Omaha has sent several messages to remind the "Sioux City Gang" that the Midland's Alzheimer Group's Ride to Remember is June 5th. They have both Ducati and Harley routes planed (and maybe even have a bicycle route). The ride includes lunch, dinner, t-shirt, and music for $25.